Increased Legalization of Marijuana Could Impact Fight Over Trademarks

It has long been a practice in the marijuana edibles industry to infringe well established brands, particularly those that operate in the snack food marketplace. A recent example of this type of knockoff product practice is TRAPATIO which clearly infringes the TAPATIO trademarks: 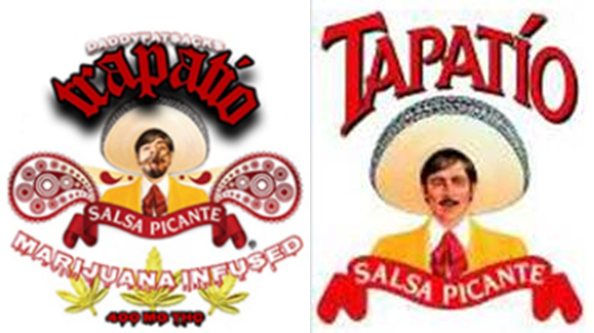 For years, some trademark owners suffering from this type of infringing activity have chosen to tolerate the corresponding abuse because of the limited volume of sales and the underground nature of these illegal transactions.

However, now that that marijuana is legal both medically and recreationally in a number of states, including but not limited to California, Oregon, Washington, Colorado and Massachusetts, and due to the fact over 40 million Americans can walk into a dispensary and purchase marijuana and marijuana infused edibles, Marijuana edibles have now entered the mainstream. Many manufacturers of infused edibles now have storefronts, business licenses, and pay taxes. They operate as legitimate state-sanctioned businesses.

Sales of marijuana infused knockoff brands have the potential to skyrocket. In order to protect a trademark owner’s brand and insure customers are not confused about the source, origin, sponsorship, or affiliation of the marijuana infused products, food manufacturers must now seriously consider stepping up their enforcement efforts with cease and desist letters and law suits when their brands are targeted by the edible marijuana product industry. Allowing these infringements to continue unchecked has the potential to severely injure a company’s trademark rights and dilute the strength of its marks.

Lewis Roca Rothgerber Christie, LLP (“LRRC”) is a leader in protecting trademark owners’ rights against these types of infringing uses. LRRC’s lawsuits against the makers of TRAPATIO, a marijuana infused knockoff of the famous TAPATIO brand of hot sauce is one of the first such suits in the nation, and has been the subject of nationwide press coverage, including but not limited to TMZ, Marijuana Business Daily, and Wealth Daly.

Having represented Tapatio Foods LLC for over twenty years, intellectual property partner Anne Wang has been instrumental in protecting Tapatio’s intellectual property rights during the tremendous growth in popularity of the TAPATIO brand within the United States, Central and South America and during the expansion of its product line from hot sauce to other food products and consumer novelty goods.