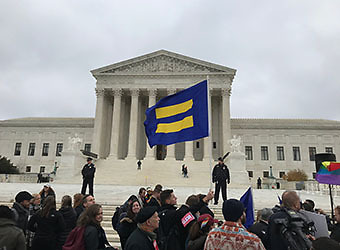 The United States Supreme Court issued a landmark decision on June 15, 2020, ruling that Title VII of the 1964 Civil Rights Act protects employees from discrimination based on their sexual orientation and gender identity. Chief Justice John Roberts and Justice Neil Gorsuch sided with the Court’s more liberal members in finding that Title VII’s ban on discrimination “because of sex” covers sexual orientation and gender identity.

Justice Gorsuch authored the 6-3 decision in favor of gay, lesbian, bisexual, transgender and queer workers, which resolved three similar cases regarding alleged discrimination based on sexual orientation and gender identity. The court held that “because discrimination on the basis of homosexuality or transgender status requires an employer to intentionally treat individual employees differently because of their sex, an employer who intentionally penalizes an employee for being homosexual or transgender also violates Title VII.” Justices Gorsuch, Roberts, Ruth Bader Ginsburg, Stephen Breyer, Sonia Sotomayor, and Elena Kagan comprised the majority, while Justices Samuel Alito, Brett Kavanaugh, and Clarence Thomas dissented.

Justice Alito called the majority’s decision “preposterous,” and wrote that Congress did not intend to bar employers from discriminating against gay and transgender workers when it passed Title VII in 1964. Justice Kavanaugh agreed, saying that Title VII does not explicitly prohibit employment discrimination because of sexual orientation, while acknowledging the “weighty” policy arguments for expanding the law’s protections.

Many states and cities already have laws that prohibit discrimination in employment on the basis of sexual orientation or transgender status. This ruling, which comes five years after the Supreme Court legalized gay marriage in the United States, is being viewed as a pivotal win for LGBTQ workers. It is also a loss for the Trump administration, which had argued that Title VII does not provide protection from discrimination for gay, lesbian, and transgender employees.

Employers in states that do not have laws that generally protects LGBTQ employees from discrimination should review and update their employment handbooks to include these employees in their anti-discrimination policies.

For more specific information regarding your unique circumstances and to address any questions you may have, please visit our Labor and Employment page.