Sports & Outdoor Recreation
You Want Me to Waive What??? 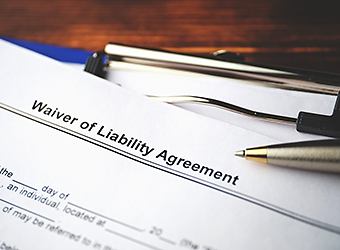 Anyone who has participated in adventure sports from SCUBA diving to whitewater rafting has seen it before: the document where you sign your life away. The best of them ask you to fill your name out at the top and then to initial every single paragraph across multiple pages of the release. As the paragraphs progress, the consequences of your "fun" activity get more and more dire. And forget about trying to edit the contract to remove paragraphs and exclusions. Even trying would confuse the often seasonal staff and result in an instant denial of your ability to participate in the activity. By the time you are done signing the document, it would seem that the company can kill you where you stand and get away scot-free.

This document is called an express assumption of the risk waiver. In it you are acknowledging that you have been told the risks of your activity, and that despite those risks you agree to pursue the activity anyway. In many industries these waivers are needed. Could you imagine what would happen if a whitewater rafter could sue the tour company every time they were thrown from the boat and hit a rock? No rafting adventures could run. At least none on a river that moved faster than a babbling brook.

The question then becomes: how far do these releases go? Can a release waive a broken bone? Death? What operational errors can the organization make and get away with? What can’t they waive? If you get bit by a shark while SCUBA diving, that is not an operator's fault, but what if you run out of air because the tank they provided you was only 1/4 full? On the one hand the operator had a duty to provide you with a full tank, on the other hand, the tanks drain during the act of diving, and the onus is on you to monitor your pressure. If you fail to monitor your pressure you have the potential to run out of air regardless of the initial fill in the tank. What about if they gave you a regulator that had not been properly serviced and stopped working at depth?

In the whitewater rafting context (which more people might understand than SCUBA diving and which does not require a certification on behalf of the participant), ordinary negligence may include:

Gross negligence may include:

Courts construe express assumption of the risk waivers narrowly and strive to make sure that they do not violate public policy. In order for a waiver to be valid the waiving party must be notified of the risks involved, and the waiver must be clear that it is absolving the other party of responsibility for their acts of negligence. But all of this is balanced with the understanding that an informed participant must be able to waive some level of liability in order to allow adventure sports operators to run.