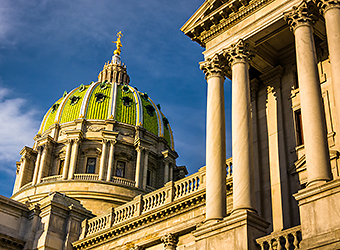 The Pennsylvania legislature is weighing two bills that require decommissioning plans for solar energy projects, and the debate over them among lawmakers illustrates the challenges associated with developing a solution to this growing issue in the renewable energy industry.

Senate Bill 284, introduced by Sen. Gene Yaw (R), and House Bill 2104, put forward by Rep. Kathy Rapp (R), both impose requirements aimed at minimizing the possibility that the cost of decommissioning solar energy sites falls on the public, including a requirement that equipment be decommissioned within 18 months after a site closes (or, in the case of Yaw’s bill, stops generating electricity). Both bills also require renewable energy producers to plan financially for the retirement of their sites through decommissioning bonds adjusted regularly to reflect current pricing. Rep. Rapp’s bill, in addition, caps the amount of solar equipment that can be sent to a landfill—no more than 20% of its total mass.

At least one Pennsylvania lawmaker, however, sees something less than unalloyed concern for the environment in Rep. Rapp’s bill. Rep. Greg Vitali (D), a longtime member of the House Environmental Resources and Energy Committee, called out a perceived double standard, noting that abandoned gas and oil wells in Pennsylvania are “woefully under bonded.”

The fate of both bills is still undecided. House Bill 2104 failed to make its way past the Environmental Resources and Energy Committee after being considered in late April and was tabled. On June 15, however, the committee signaled the bill’s resurrection by removing it from the table, suggesting it is up for possible renewed consideration. Sen. Yaw’s bill, meanwhile, passed the Pennsylvania Senate by a vote of 35-15, with some Democrats crossing the aisle to support it and some Republicans voting against. The bill was referred to the House Environmental and Energy Committee, where it has sat in committee since mid-April.

The progress that Senate Bill 284 and House Bill 2104 have made in the Pennsylvania General Assembly reflects an increasing awareness among state legislatures of the need for renewable energy decommissioning legislation. States are not waiting for federal regulations but rather are moving quickly to act on their own, as Texas and Montana have previously. Municipalities are also taking the initiative.  Earlier this month, East Buffalo Township in Union County, Pennsylvania amended its Zoning Code to address the recycling and disposal of solar energy system components upon their decommissioning.

Regardless of what happens with this Pennsylvania legislation, as the nation increasingly shifts toward clean energy resources and older solar power equipment reaches the end of its useful life, state and local governments as well as renewable energy industry members should proactively develop decommissioning, recycling, and disposal standards and plans for solar energy equipment. Although many approaches to date have focused on bonding requirements, the Pennsylvania legislation shows that there is also increasing interest in crafting other substantive requirements addressing the timing and scope of decommissioning.