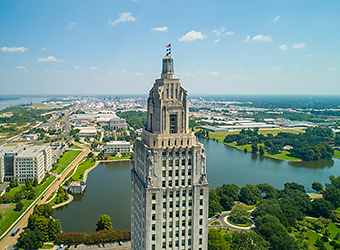 Louisiana has joined the growing number of states requiring solar producers to provide financial security for clean-up costs associated with shutting down their facilities. The state’s decommissioning statute, signed into law last month, imposes a number of end-of-life planning requirements on solar energy producers, but also creates a considerable exemption for regulated utilities.

Below are some key features of the law, which offers a unique approach to the issue. The Louisiana law:

This approach appears to be informed by Louisiana’s experience in dealing with oil and gas wells abandoned by their owners and operators without proper closure. For the moment, however, the requirements applicable to solar facilities are largely theoretical. That’s due to the carve out for regulated utilities. Section 1154(A)(9)(c) states that the requirement to provide financial security “shall not apply to . . . solar power generation facilities that are owned by an electric utility provider regulated by the Public Service Commission or the council of the city of New Orleans,” as long as they meet certain conditions. Facilities on land owned by the utility must be able to “demonstrat[e] a decommissioning plan to the regulator.” Facilities on leased land, meanwhile, must guarantee the cost of the decommissioning plan to the lessor; the lease must also provide for decommissioning at the end of the lease or “upon other circumstance that requires closure of the facility.”

At least for the moment, the utility exception effectively swallows the rule whole since all five of Louisiana’s currently operating solar plants (and most in the planning stage) fall under the exemption. Though the legislation passed unanimously, the breadth of the exemption has caused handwringing, at least among independent solar producers who complain of an uneven playing field.

Also, unlike a similar law in neighboring Texas, the Louisiana law does not allow the cost estimate for decommissioning a plant to be discounted by the salvage value of the plant’s materials (except in narrow circumstances). The lack of uniformity on the salvage issue creates regulatory unevenness that poses obstacles to solar developers operating in multiple states. It also reflects, however, the determination of each jurisdiction to regulate in a way that meets its own needs.