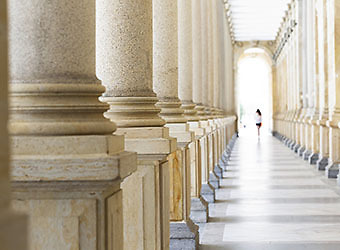 The Contract Disputes Act allows contractors seeking payment of a claim arising from a contract with the federal government six years from the date it accrued to submit the claim to the contracting officer. Failure to do so will result in the claim being rejected as untimely. Recently, the U.S. Court of Appeals for the Federal Circuit was presented with a factually complex claim scenario and used the opportunity to clarify when a claim is deemed to have accrued. In Triple Canopy, Inc. v. Secretary of the Air Force, 14 F.4th 1332 (Fed. Cir. 2021), the federal circuit found the contractor’s claims for reimbursement of a foreign government’s financial penalty accrued within six years of submittal and were therefore timely.

Triple Canopy is a private security company. Its claims arose out of six fixed-price contracts for security services that Triple Canopy performed for the Department of Defense in Afghanistan. Each of the contracts required the contractor to comply with local law and incorporated FAR 52.229-6, Taxes—Foreign Fixed-Price Contracts (“Foreign Tax Clause”). This clause provides in relevant part that “the contract price shall be increased by the amount of any after-imposed tax or of any tax or duty specifically excluded from the contract price by a provision of this contract that the Contractor is required to pay or bear...”. The clause further requires in paragraph (i) that the contractor must “take all reasonable action to obtain exemption from or refund of any taxes or duties...”.

In February 2008, the Government of the Islamic Republic of Afghanistan issued a directive reciting that the number of staff of each private security company shall not be more than 500 people, unless the Council of Ministers agrees to an increased number of staff. This regulation did not provide for the imposition of any fees or penalties on private security companies operating in Afghanistan that exceeded the 500-person limit.

On August 13, 2010, the contracting officer, on behalf of the DOD, sent a letter to the Afghan government informing it that Triple Canopy’s staffing requirement in support of U.S. military contracts would exceed 500 personnel. The letter requested an exception from the maximum on allowable security staff. On August 16, 2010, Triple Canopy submitted this letter to the Afghan government in support of its request that it issue a formal exemption as to the 500-person limit.

On March 15, 2011, the Afghan government issued a further directive requiring that all private security companies operating in Afghanistan pay a fee for each person over the 500-employee ceiling and a higher fee for each foreign national working without an Afghan visa. The Afghan government implemented this directive on March 24, 2011 by assessing penalties for each individual Triple Canopy employed over the 500-person limit. It instructed Triple Canopy to pay the assessment within 15 days but also informed the contractor that if it objected to the assessment, it could provide its reasoning in writing within two weeks.

On March 27 and 28, 2011, the DOD again sent letters to the Afghan government requesting that Triple Canopy be exempted from the 500-person limit “to ensure there is no disruption to Afghanistan’s reconstruction process.” Triple Canopy formally appealed the assessment on April 8, 2011. Shortly thereafter, on April 21, 2011, Triple Canopy informed the contracting officer that it would submit requests for equitable adjustments if its appeal of the March 24 assessment was denied.

On July 6, 2011, the Afghan government sent a letter to Triple Canopy reducing the total penalty assessed in its March 24 letter. Within two weeks, on July 18 and 20, 2011, Triple Canopy paid the reduced assessment.

Fast-forwarding several years, on June 6, 2017, within six years of both the Afghan government’s letter of July 6, 2011, and Triple Canopy’s payment of the reduced assessment on July 18 and 20, 2011, Triple Canopy submitted claims to the contracting officer under each of its six contracts. These claims sought reimbursement for the reduced penalty it had paid to the Afghan government. The contracting officer did not decide these claims and so they were deemed denied. Triple Canopy appealed the denial to the Armed Services Board of Contract Appeals (ASBCA).

The ASBCA denied Triple Canopy’s appeal on the grounds that the asserted claims were time-barred because they were not submitted to the contracting officer within six years of the date they accrued. Accrual of a claim is defined by FAR 33.201, which states that a claim is deemed to accrue --

...when all events that fix the alleged liability of either the Government or the contractor and permit assertion of the claim, were known or should have been known. For liability to be fixed, some injury must have occurred. However, monetary damages need not have been incurred.

In its ruling, the board rejected Triple Canopy’s argument that its claims did not accrue until it paid the reduced penalty on July 18 and 20, 2011. Rather, the board agreed with the U.S. government that Triple Canopy’s obligation to pay the penalty was fixed on March 24, 2011, when the Afghan government assessed the penalty. The board stated that once Triple Canopy became legally obligated to pay the assessment, the costs were incurred. The fact that the final amount could change did not matter, nor did the fact that actual payment had not yet occurred.

The board also rejected Triple Canopy’s argument that its claims under the contracts did not accrue until it exhausted its appeal because it was required to seek an exemption to the penalty under paragraph (i) of the Foreign Tax Clause. According to the board, the process of appealing the assessment levied on Triple Canopy was not mandatory, but was rather an optional process Triple Canopy elected to undergo to potentially avoid the penalty. Therefore, the appeal process did not delay the running of the statute of limitations.

Triple Canopy further appealed the ASBCA’s denial of its appeal to the federal circuit. As it did before the board, Triple Canopy argued that no claims accrued under the Foreign Tax Clause until it complied with paragraph (i), which required that it “take all reasonable action to obtain exemption from or refund of any taxes or duties.”

Tracking the ASBCA ruling, the U. S. government responded that paragraph (i) of the Foreign Tax Clause did not set forth a mandatory pre-claim procedure that prevented submission of the claims as of March 24, 2011. The government maintained that paragraph (i) only requires a contractor to take all reasonable action to obtain exemption from any taxes or penalties, and it states that this requirement is only triggered when the contractor is exempt under the laws of the country concerned. In other words, the U.S. government contended that because Triple Canopy could not qualify for an exemption from the Afghan directive, paragraph (i) did not apply and Triple Canopy was not required to appeal the assessment. Finally, the U.S. government argued that the plain language of FAR 52.229-6 does not dictate that a contractor must take its “reasonable action” seeking an exemption prior to submitting a claim under the Contract Disputes Act.

Fortunately for Triple Canopy, the federal circuit agreed with the contractor that because it was seeking reimbursement of the Afghan assessment pursuant to the Foreign Tax Clause, it had to comply with the paragraph (i) requirement that it take all reasonable action to obtain an exemption from the assessment. This meant appealing the assessment. In the circumstances of this case, the court viewed the appeal to the Afghan government as a mandatory pre-claim procedure that had to be completed for Triple Canopy’s claims to accrue and the limitations period to begin to run.

As the court detailed, having been informed by the DOD that it was considered to have a valid exemption from the 500-person limit, Triple Canopy could not properly disregard the requirement in paragraph (i) that it take all reasonable action and not appeal the Afghan assessment, and then still be eligible for reimbursement for the penalty under the Foreign Tax Clause. Moreover, the federal circuit considered it reasonable for Triple Canopy to take the position that it was exempt under the laws of the country concerned pursuant to paragraph (i) because the DOD had repeatedly requested an exemption and because Triple Canopy had not received notice from the Afghans that its exemption request had been denied. While the appeal to the Afghan government was not completely successful, it did result in a substantial reduction of the assessment.

Based on this reasoning, the federal circuit held that Triple Canopy’s claims under the six contracts did not accrue until July 6, 2011, the date the Afghan government issued its decision in response to Triple Canopy’s appeal of the assessment. Triple Canopy’s submission of its claims to the contracting officer on June 6, 2017 was therefore within the six-year limitations period in the Contract Disputes Act.

Triple Canopy, Inc. v. Secretary of the Air Force offers two useful takeaways to other contractors – one is a legal ruling and the other a practical caution. The legal ruling is the federal circuit’s interpretation of the accrual of claims provision in the Contract Disputes Act in a manner favorable to contractors. Specifically, it found that the liability of Triple Canopy was not fixed until it had exhausted its effort to obtain an exemption from the penalty imposed by the Afghan government. In reaching this conclusion, the court rejected the board’s view that liability was fixed when the penalty was first assessed and thus extended the time available to Triple Canopy to submit a timely claim. Contractors who have the opportunity to challenge an adverse determination before bringing a claim to the contracting officer may consider citing this case should the timeliness of its claim become a concern. Of course, whether the federal circuit’s reading of the accrual provision extends beyond the Foreign Tax Clause remains to be seen.

The practical caution is that although Triple Canopy’s claims were ultimately found timely, this contractor took an unnecessary risk in waiting so long to submit these claims to the contracting officer. As the federal circuit ruled, the liability of Triple Canopy was fixed when the Afghan government imposed the reduced penalty on July 6, 2011. Presumably, Triple Canopy could have submitted its claims for reimbursement any time thereafter but did not do so until June 6, 2017, five years and eleven months after the claims accrued. The facts of this case do not disclose the reason for this delay, but it was almost fatal to Triple Canopy’s case. Had it not further appealed the ASBCA’s denial of its first appeal and had the federal circuit not construed the accrual provision favorably, Triple Canopy would have been out of luck.

If you have any questions regarding this client alert or how the Contract Disputes Act could affect your business, please contact the author Ross Crown at rcrown@lewisroca.com.