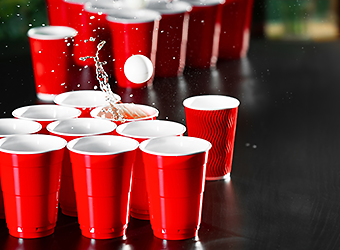 The “ball” is one of the icons that dominates the world of sports.  In fact, when my daughter was very young, she referred to baseball as “sports ball” and she never wanted to play catch, it was always “throw the ball…catch the ball.” She was, in her defense, only four years old at the time.

Flash-forward-in-time to when she was of legal drinking age and, “if” I recall correctly, when at a party of young people I was somehow invited to, I carefully chose my favorite-colored ping pong ball and schooled her in the game of Beer Pong.  All of this leads me to discuss a few somewhat interesting trademark concepts highlighted in a recently issued decision by the United States Trademark Trial and Appeal Board (“TTAB”).  In  In re P&P Imports LLC, the TTAB upheld the refusal by the United States Patent and Trademark Office (“USPTO”) to register United States Trademark Application Serial No. 88915014 (BREWSKI for “equipment sold as a unit for playing drinking games comprised of an apparatus for holding cups”).

The BREWSKI application was denied based on the existence of United States Trademark Registration No. 5549894 (BREWSKI BROTHERS for “sports balls”), along with an allegation of Likelihood of Confusion.

In regard to the issue of the Similarity of the Marks, the Applicant took a swing and missed while trying to argue the two relevant marks were sufficiently different because the “brothers” portion of the cited BREWSKI BROTHERS mark was the dominant portion.  However, when making this argument, the Applicant ignored the fact the “brothers” portion of the cited registered mark had been disclaimed by the owner of the registration.   PRACTICE POINTER:  it is NEVER a good idea to argue the disclaimed portion of a cited registered trademark is the dominant portion.  The TTAB held the two marks were “very similar.”

In regard to the issue of the Relatedness of the Goods, the Applicant threw a wild pitch when it argued its product could not be used with a sports ball even though the product itself seemed to be a clever improvement on the game of Beer Pong by keeping the cups from moving after being hit by an aggressively thrown ping pong ball….thereby keeping the playing field consistently the same for all participants as the inebriated state of the players progressed predicably.  PRACTICE POINTER:  Even though it does not appear the owner of the BREWSKI BROTHERS trademark registration actually used its mark on ping pong balls, the registration covered “sports balls” which inherently covers all sports balls, including ping pong balls.

Ultimately, the TTAB held that ping pong balls were related to beer drinking games because of the traditional and popular use of ping pong balls when playing Beer Pong.  When arguing in front of the TTAB, and when the marks are held to be “very similar” and the goods are held to be “related,” the chances are quite good the TTAB will ultimately find a likelihood of confusion.

From an Applicant’s perspective, and when trying to counter trademark registration evidence relied upon by the Trademark Examiner, the Applicant can quite easily conducting a series of searches for:

So, is Beer Pong a sport?  Nobody knows.  The debate continues.